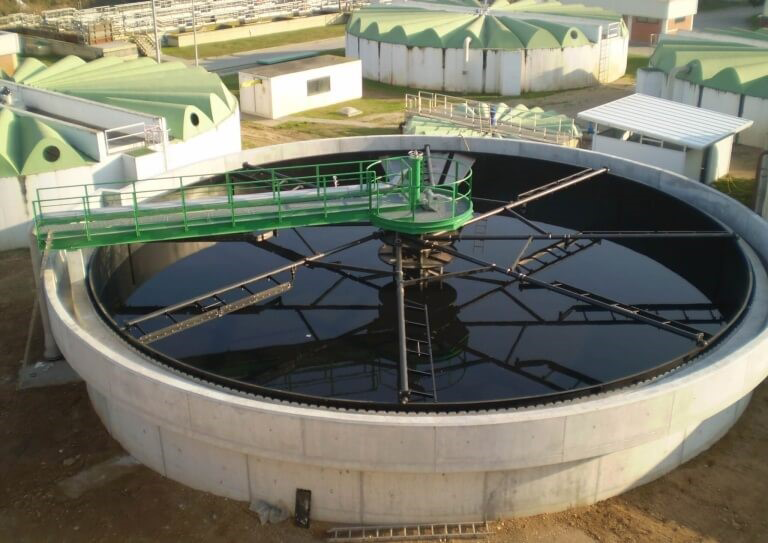 Dissolved Air Flotation (DAF) systems are designed to remove suspended solids (TSS), biochemical oxygen demand (BOD5), and oils and greases (O&G) from a wastewater stream. Contaminants are removed through the use of a dissolved air-

in-water solution produced by injecting air under pressure into a recycle stream of clarified DAF effluent. This recycle stream is then combined and mixed with incoming wastewater in an internal contact chamber where the dissolved air comes out of solution in the form of micron-sized bubbles that attach to the contaminants. The bubbles and contaminants rise to the surface and form a floating bed of material that is removed by a surface skimmer into an internal hopper for further handling.

Structures and Its Working Processes

Air flotation separation technology dissolves air into water at certain working pressure. In the process, pressurized water is saturated with dissolved air and is discharged into a flotation vessel. The microscopic air bubbles produced by released air attach to suspended solids and float them to the surface, forming a sludge blanket. A scoop removes the thickened sludge. Finally, it complete purifies the water. 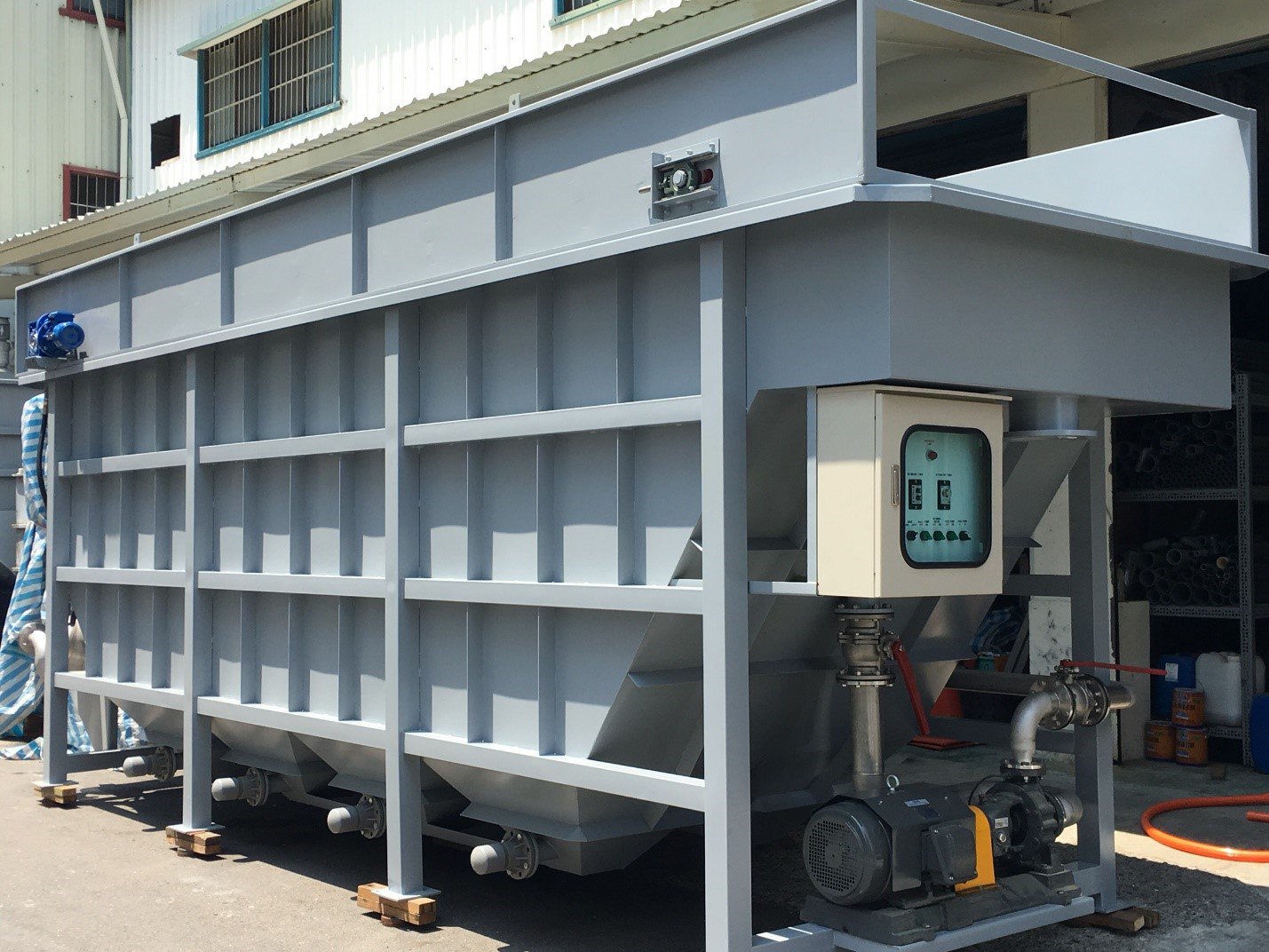 Air flotation technology plays an important in solid-liquid separation (Simultaneously reduce COD, BOD, chroma, etc). Firstly, mix flocculating agent into raw water and stir thoroughly. After the effective retention time (lab determines the time, dosage and flocculation effect), the raw water enters into the contact zone where microscopic air bubbles adhere to the floc and then flows into the separation zone. Under the buoyancy effects, the tiny bubbles float the flocs to the surface, forming a sludge blanket. A skimming device removes the sludge into the sludge hopper. Then the lower clarified water flows into the clean-water reservoir through the collecting pipe. Some of water are recycled to the flotation tank for the air dissolving system, while others will be discharged. 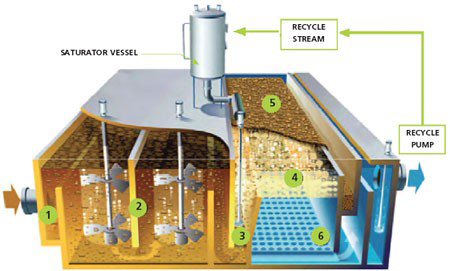 The feed water to the DAF float tank is often (but not always) dosed with a coagulant (such as ferric chloride or aluminum sulfate) to coagulate the colloidal particles and/or a flocculant to conglomerate the particles into bigger clusters.
A portion of the clarified effluent water leaving the DAF tank is pumped into a small pressure vessel (called the air drum) into which compressed air is also introduced. This results in saturating the pressurized effluent water with air. The air-saturated water stream is recycled to the front of the float tank and flows through a pressure reduction valve just as it enters the front of the float tank, which results in the air being released in the form of tiny bubbles. Bubbles form at nucleation sites[4] on the surface of the suspended particles, adhering to the particles. As more bubbles form, the lift from the bubbles eventually overcomes the force of gravity. This causes the suspended matter to float to the surface where it forms a froth layer which is then removed by a skimmer. The froth-free water exits the float tank as the clarified effluent from the DAF unit.[1]
Some DAF unit designs utilize parallel plate packing material (e.g. lamellas) to provide more separation surface and therefore to enhance the separation efficiency of the unit.
DAF systems can be categorized as circular (more efficient) and rectangular (more residence time). The former type requires just 3 minutes. A particular circular DAF system is called “Zero speed”, allowing quite water status then highest performances. The rectangular type requires 20 to 30 minutes. One of the bigger advantages of the circular type is its spiral scoop. 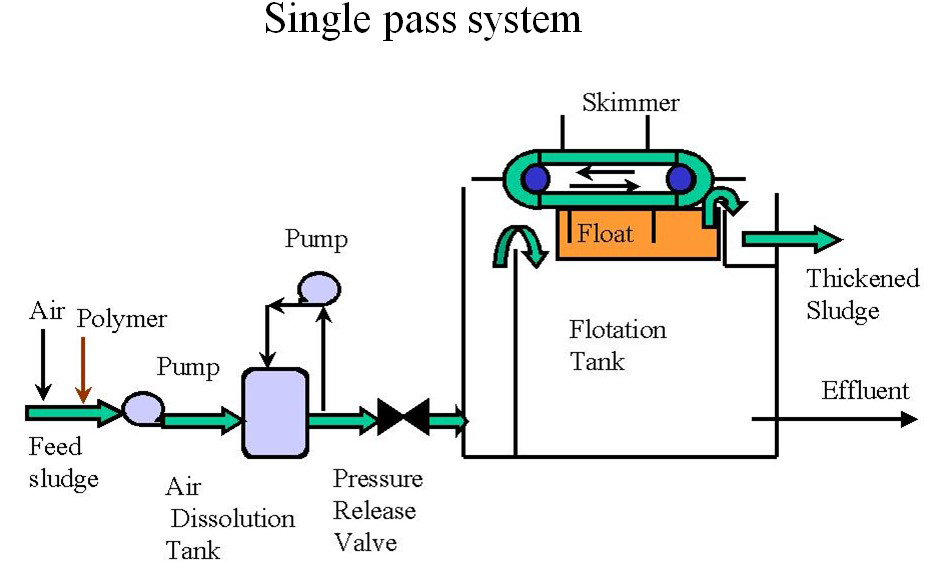 In the DAF process, very fine gas bubbles are generated by reducing the pressure on a stream of the wastewater that has been exposed to air at pressures greaterthan atmospheric; the solubility of oxygen in water at two different pressures (30 and 65 psi) . When the pressure is reduced, as the liquid flows through a pressure-reducing valve into the flotation basin, small bubbles nucleate from the supersaturated solution, attach to, and become entrapped by oil and solid particles and rise to the surface where they are removed. Although air is the most common gas used in this process, methane, nitrogen, and carbon dioxide have been used.

Two methods exist for generating air bubbles in the DAF process:
1. Air is dissolved in the liquid wastewater under pressure (30–85 psi). The pressurized stream is passed through a pressure-relief valve to be discharged near the bottom of a flotation tank where the total pressure equals the ambient air pressure plus the hydrostatic head. Here small bubbles nucleate and rise to the surface carrying the contaminants with them.

2. The wastewater is aerated until it is saturated with air at atmospheric pressure. Subsequent application of vacuum (about 9 in Hg) yields bubbles (described above as vacuum desorption). As stated previously, this process is no longer used.

A DAF system consists of the following units: 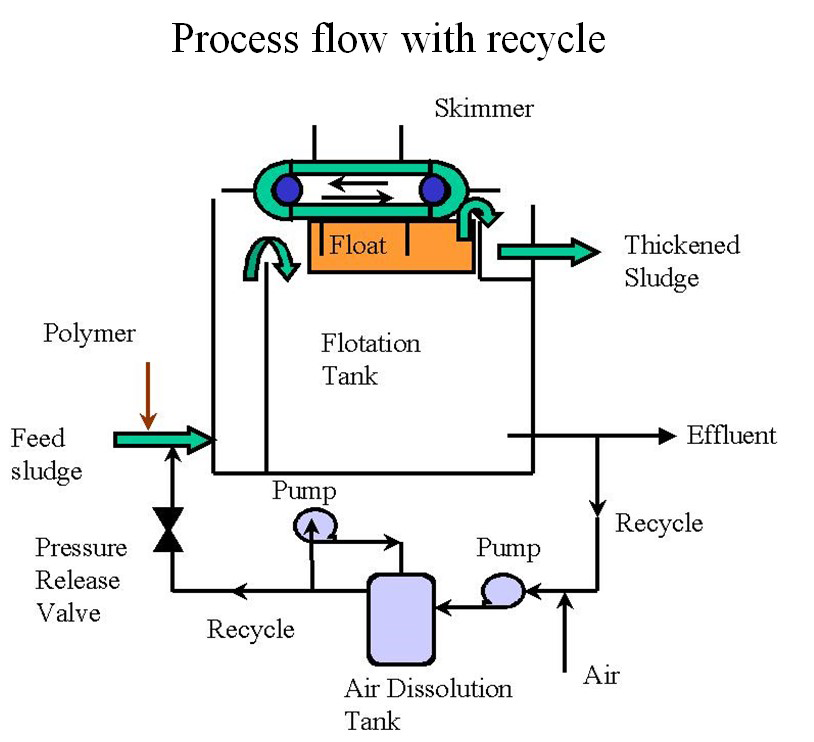 An added feature in most systems is the addition of chemicals to break emulsions or promotefloc formation.

There are three liquid flow schemes that can be used in the pressurization sequence:
1. Full flow. In the full-flow system, all of the incoming raw wastewater is pressurized and saturated with air. This modus operandi results in the most air being dissolved and (compared with the other two methods) yields the maximum probability of good particle–bubble contact, but it also results in a larger saturation system and subjects potentially coagulated flocs to the shearing action of the pump and pressure-reduction process. 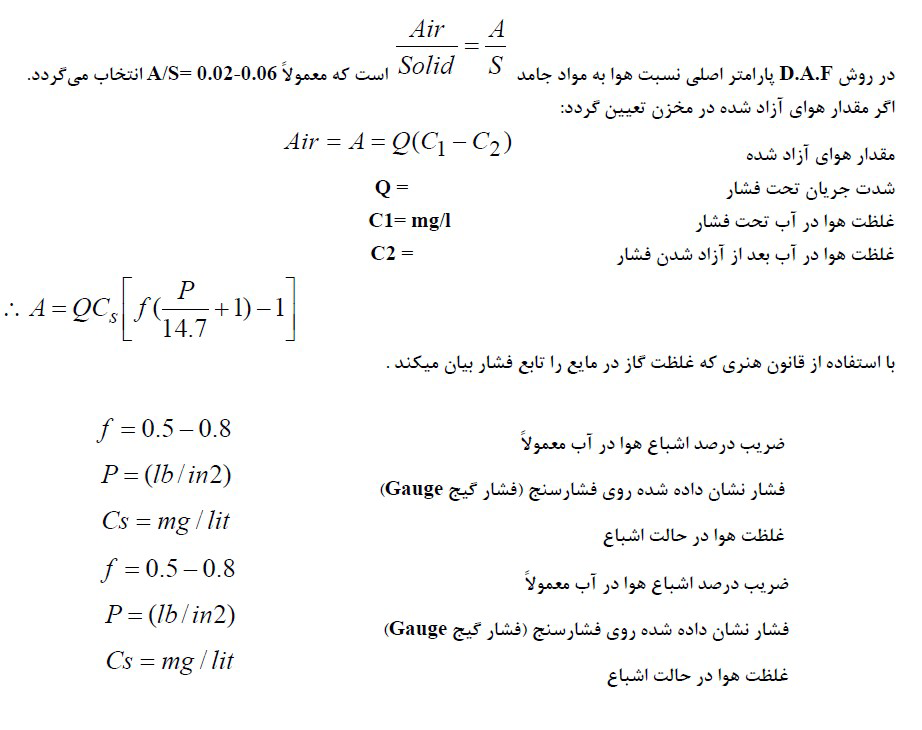 2. Split flow. In the split-flow sequence, part of the incoming wastewater is diverted through the pressurization aeration system. Reduced pumping costs, better capacity of the system to handle flow fluctuations, and reduced breakup of the flocs are among the major advantages of this system.
A disadvantage common to split flow and full-stream pressurization systems is shearing of flocs oremulsification of oil when the influent stream is subjected to pressure reduction. The amount of air dissolved, at comparable pressure, is less than in full-stream pressurization because of the lower flow rate.

3. Recirculation. In the recirculation mode of operation, 20–50% of the treated wastewater is returned to the pressurization system, thus avoiding disruption of flocs or demulsification of the oil in the untreated influent. Larger flotation basins, however, have to be used if the hydraulic loading rate (based on the influent flow rate) is not to be changed, because the recirculation flow is now added to the full-stream flow.

Each mode of operation has distinct advantages and disadvantages that must be evaluated for each individual situation. A few of the more general are described below. 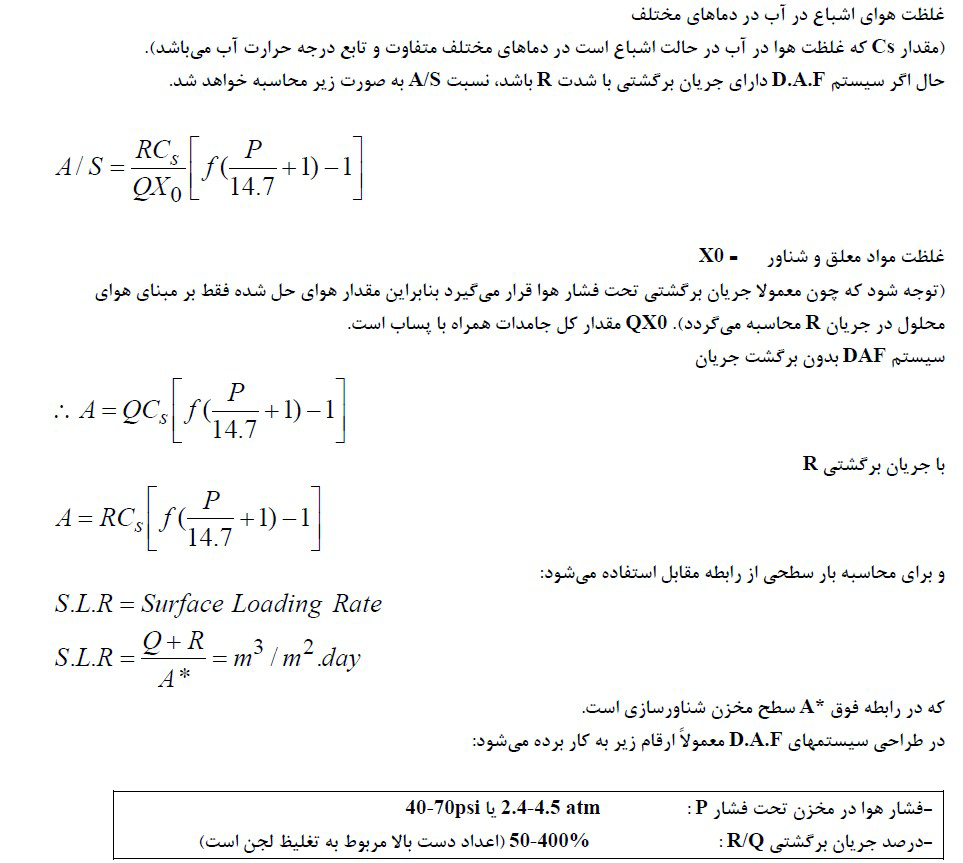 Advantages:
(a) Provides maximum gas solution at any given pressure. At comparable pressures, more gasdissolves in solution than in split-stream or recycle pressurization because the entire streamis pressurized.
(b) For the same plant throughput, a smaller flotation chamber is required than for recyclepressurization.
(c) Because of the increased dissolved gas content, the maximum number of bubbles may beformed so that the probability for contact with the dispersed phase is increased.

Disadvantages:
(a) The total solids content must be pumped, increasing abrasive wear and operation andmaintenance costs.
(b) Oil in the influent stream tends to become further emulsified by the shear forces
of pumping, increasing the difficulty of separation.

(a) Requires a smaller pressurizing pump than full-stream pressurization and henceresults in areduction in operating and maintenance costs.
(b) The flotation chamber is the same size as for full-stream pressurization but smaller than for recycle operation.
(c) Simpler pump controls than in full-stream operation are required to accommodate a fluctuating flow. The pump may be operated at a constant rate and the fluctuations in flow remain in the unpressurized portion. However, as the flow increases, the air-to-solids ratio decreases, which may adversely affect performance.
(d) When coagulating chemicals are used, the unpressurized stream may act as a flocculation chamber.

Disadvantages:
(a) At comparable pressures, a smaller volume of gas is dissolved than in full-stream pressurization.
(b) A certain amount of abrasive solids still must be pumped.
(c) Some oil in the influent stream still will be emulsified as a result of the shear forces in the pumping process.

(a) A smaller pressurizing pump is required than in full-stream pressurization so that capital and operating costs are reduced.
(b) The system requires simple pump controls for variable flow.
(c) Emulsion formation due to shear is minimized.
(d) Abrasive solids need not be pumped since they are largely separated in the flotation chamber prior to pressurization.
(e) Flocs formed in the system are not subjected to the shearing forces of the pressurizing pump.

Disadvantages:
(a) To maintain hydraulic loadings (gal/min/ft2 of flotation area) comparable to those in full- and split-stream operation, it is necessary to enlarge the flotation chamber.
(b) Another potential disadvantage of recycle operation is in the process of thickening of activated sludge by DAF. Maximum solids removal is obtained at recycle rates from 20 to 50% of the total flow. Explanation for this phenomenon is that the greater turbulence produced by the increased hydraulic loading offsets improved rise rates resulting from diluted solids feed and increased air content.
One of the early workers, Rohlich, concluded in his 1954 study of various modes of
pressurization of refinery wastewater that the recycle system was best. That conclusion has not changed with time.