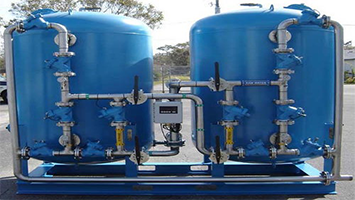 Water, passing through the atmosphere as snow or rain, picks up carbon dioxide (CO2) and other acid gases and reaches the Earth’s surface as a weakly acidic solution (CO2 + H2O  H2CO3) commonly referred to as carbonic acid.. The rain that falls into surface waters such as streams, rivers, ponds and lakes are normally low in dissolved solids and hardness. As this water soaks in, it passes through various strata containing limestone (CaCO3) which neutralizes the acid forming a soluble calcium bicarbonate salt (H2CO3 + CaCO3  Ca (HCO3)2 which then dissociates into ions. (Ca++) ions with a plus 2 positive charge is a cation and HCO3 – with a single negative charge contributes two anions. This is how calcium (and magnesium) end up in all our water supplies. Where the calcium and magnesium content is high these waters are described as “hard” waters. 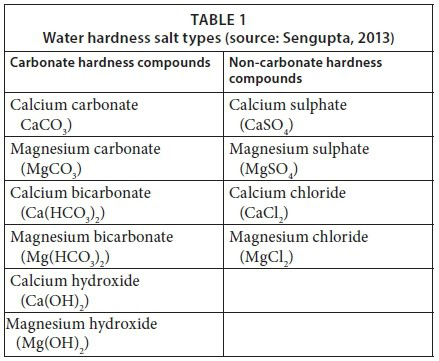 When hard water is heated, the Ca(HCO3)2 decomposes to CaCO3 and evolves CO2 gas and H2O (water). CaCO3 is insoluble and deposits on the surfaces of water heaters, often found in boilers, coffee makers, pipes and on to fabrics, creating a hard scale (known as calcite, lime scale, boiler scale or hardness scale). This scale is a poor conductor of heat and so it takes more energy to heat water if the heater element or boiler tube is covered with this scale. Scale can also clog pipes and appliances and reduces the life of fabrics due to its abrasive nature. In addition, when washing you will notice the soluble calcium and magnesium salts will react with soap causing the familiar bathtub ring and soap scum. Needless to say, it is often desirable to remove hardness ions before using the water in residential as well as industrial applications. Ion exchange is often the process of choice for removing hardness ions. In domestic applications a low level of hardness can be permitted. In industrial applications, particularly boilers, total hardness has to be almost totally removed. Ion exchange was first observed and recognized by Thompson and Way in 1858 noting that when an ammonium salt was poured through soil, a different water composition trickled out of the bottom of the container. The soil had captured the ammonium ion and released sodium. Natural soil contains clays and zeolites that have ion exchange capabilities. By order of selectivity, multi-valent ions are grabbed onto by ion exchangers which will then release a less tightly held ion (which is often more desirable). It should be noted that mono-valent ions such as sodium or potassium do not cause scale and do not react with soap. 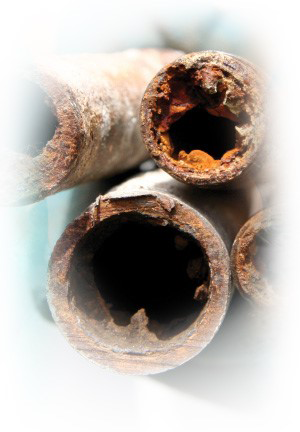 The presence of calcium (Ca2+) and magnesium (Mg2+) ions in a water supply is commonly known as “hardness.” It is usually expressed as grains per gallon (gpg). Hardness minerals exist to some degree in virtually every water supply. The following table
classifies the degree of hardness: 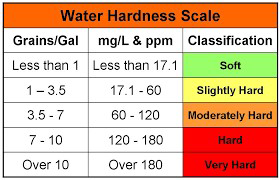 Zeolites were synthesized in 1903 offering higher capacity and stability than the natural zeolites and German industrial pioneer, Robert Gans commercialized the first regenerable ion exchanger for removing hardness in 1905. The synthesis of new chemistry gradually improved the efficiency of the regenerable softener through the 1940s when G.F. D’Alelio of GE produced the first suspension polymers of styrene and di-vinyl benzene (S/DVB) which gave birth to the modern ion exchanger. The basic chemistry of softening resins has remained unchanged since that time. Ion exchange softening systems use reactive plastic polymer beads with chemical functionality that selectively captures the di-valent ions such as calcium and magnesium and releases less tightly held monovalent ions, normally sodium. The reaction is as follows:
CaR + 2NaCl  Na2R + CaCl2

During the softening process,calcium and magnesium that are present in the water supply are exchanged on to the ion exchange resin beads as the water flows past a bed of the resin placed in a suitable column. In turn the resin releases an equivalent amount of sodium into the water, so the water exiting the water softener is significantly higher in sodium than the untreated water. 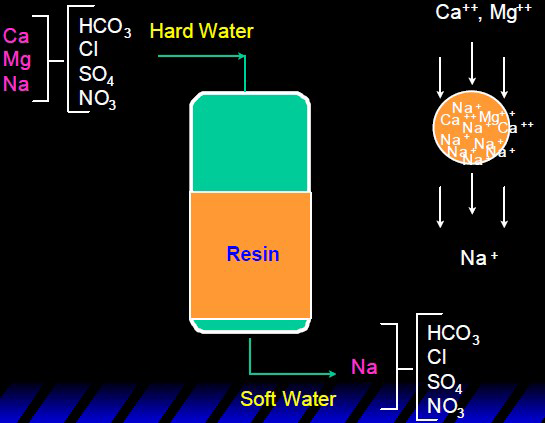 • Regeneration:
During the regeneration process, a solution of salt (brine or sodium chloride) is used to displace calcium and magnesium that were taken up previously by the resin beads, with the sodium from the brine taking the place of the calcium and magnesium.
All other things being equal, the more brine that is used, the more efficiently is the hardness displaced from the resin. So for more demanding applications (like for use of the water in a boiler), more brine is typically used so that when the resin is put into service again, there is a minimum amount of hardness left on it. If insufficient brine is used, then hardness escaping with the treated water, referred to as “hardness leakage” will be higher.

1. Service – the water is being softened.
2. Backwash – the direction of flow is reversed and the silt, sediment and iron particles are flushed from the resin. The backwash cycle on a typical softener requires a flow rate of about 13 L/min (3 gallons per minute). Water consumption for the regeneration of most domestic softeners is 300 to 450 L (70-100 gallons).
3. Brine – the brine solution is slowly passed through the resin, until the resin retains as much sodium as possible.
4. Rinse – excess brine is rinsed from the resin.
5. Fast rinse – the resin bed is compacted for maximum operating efficiency.
The water softener then returns to the service cycle. 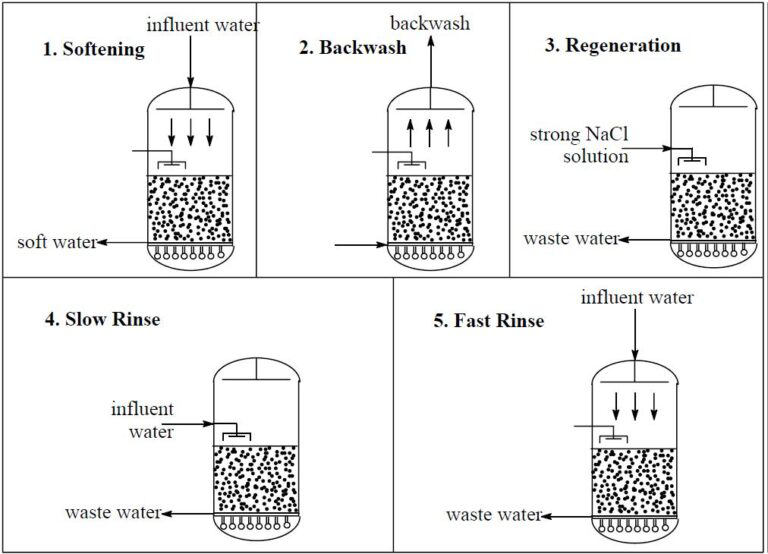 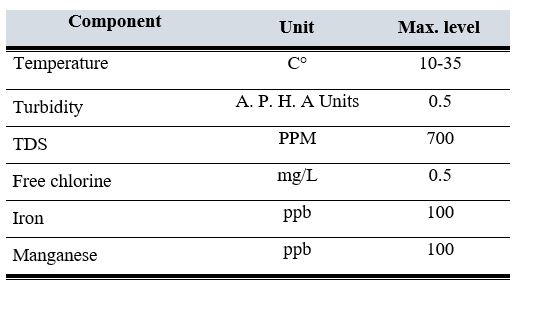 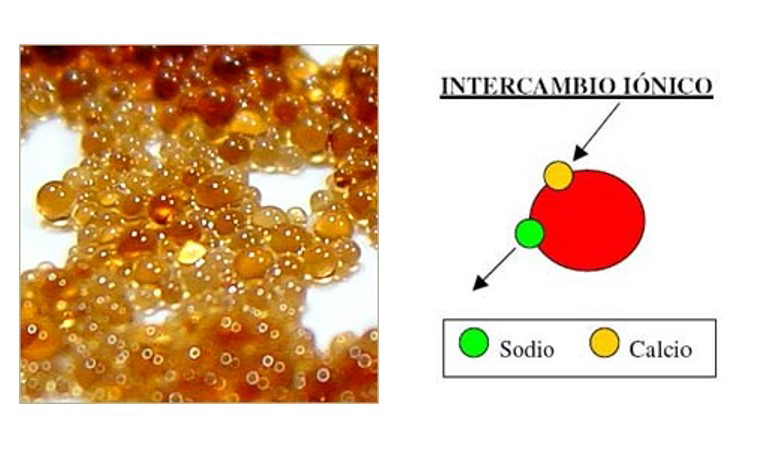 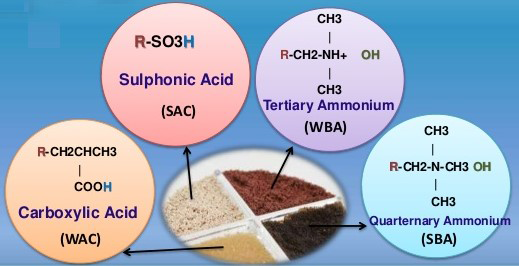 Microscopic view of cellular resin beads (20-50 mesh) of a sulfonated styrene-divinylbenzene strong acid cation exhcanger. (Courtesy of Rohm and Haas Company.)
SODIUM ZEOLITE SOFTENING
Sodium zeolite softening is the most widely applied use of ion exchange. In zeolite softening, water containing scale-forming ions, such as calcium and magnesium, passes through a resin bed containing SAC resin in the sodium form. In the resin, the hardness ions are exchanged with the sodium, and the sodium diffuses into the bulk water solution. The hardness-free water, termed soft water, can then be used for low to medium pressure boiler feedwater, reverse osmosis system makeup, some chemical processes, and commercial applications, such as laundries.

Principles of Zeolite Softening
The removal of hardness from water by a zeolite softening process is described by the following reaction:

Water from a properly operated zeolite softener is nearly free from detectable hardness. How-ever, some small amounts of hardness, known as leakage, are present in the treated water. The level of hardness leakage is dependent on the hardness and sodium level in the influent water and the amount of salt used for regeneration.
the softener produces a low, nearly constant level of hardness until the ion exchange resin nears exhaustion. At exhaustion, the effluent hardness increases sharply, and regeneration is required.
As illustrated by the softening reactions, SAC resin readily accepts calcium and magnesium ions in exchange for sodium ions. When exhausted resin is regenerated, a high concentration of sodium ions is applied to the resin to replace calcium and magnesium. The resin is treated with a 10% sodium chloride solution, and regeneration proceeds according to the following equation:

During regeneration, a large excess of regenerant (approximately 3 times the amount of calcium and magnesium in the resin) is used. The eluted hardness is removed from the softening unit in the waste brine and by rinsing. 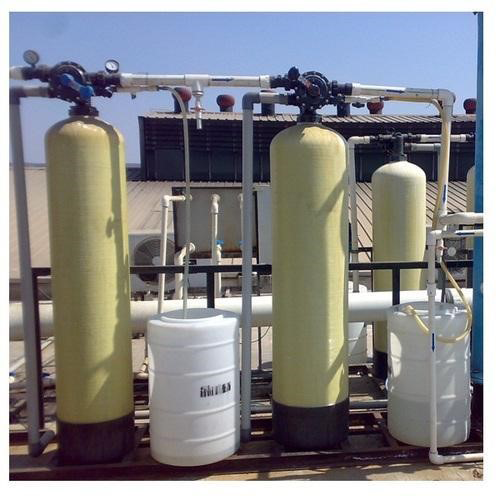 After regeneration, small residual amounts of hardness remain in the resin. If resin is allowed to sit in a stagnant vessel of water, some hardness will diffuse into the bulk water. Therefore, at the initiation of flow, the water effluent from a zeolite softener can contain hardness even if it has been regenerated recently. After a few minutes of flow, the hardness is rinsed from the softener, and the treated water is soft.
The duration of a service cycle depends on the rate of softener flow, the hardness level in the water, and the amount of salt used for regeneration. Table 8-1 shows the effect of regenerant level on the softening capacity of a gelular strong cation resin. Note that the capacity of the resin increases as the regenerant dosage increases, but the increase is not proportional. The regeneration is less efficient at the higher regenerant levels. Therefore, softener operating costs increase as the regenerant level increases. As shown by the data in Table 8-1, a 150% increase in regenerant salt provides only a 67% increase in operating capacity.